Bern. Federal Councillor Sommaruga signed on Tuesday in Colombo, together with Sri Lankan Interior Minister Seneviratne Bandara Nawinne, a bilateral migration agreement. The agreement establishes a foundation for strengthening cooperation with the Sri Lankan authorities on migration matters. It also outlines procedures for the repatriation of persons who will be returned, and thus improves legal security. Before the signing ceremony, Ms. Sommaruga visited the former conflict area in the north of the country, where she met, among others, with Sri Lankan returnees from Switzerland, human rights activists, as well as other representatives of the civil society. On Wednesday, Federal Councillor Sommaruga is scheduled to meet with Sri Lankan President Maithripala Sirisena before travelling to the Indian capital of New Delhi for further talks.

Federal Councillor Sommaruga on working visit to Sri Lanka and India, 3 to 7 October 2016 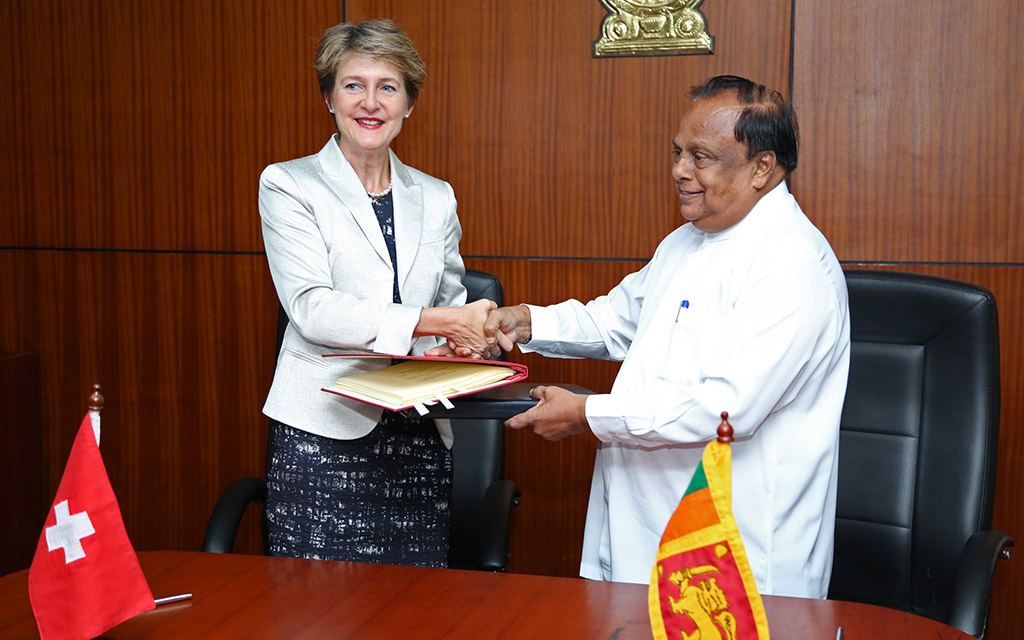 The migration agreement with Sri Lanka establishes a foundation for strengthening cooperation with the Sri Lankan authorities in such areas as voluntary repatriation and reintegration, assistance in the fight against smuggling and trafficking in human beings, and migration management. Federal Councillor Sommaruga explained that the migration agreement is an important instrument allowing the intensification of cooperation between the two countries. "In the medium term," she noted, "the agreement can be extended to provide the basis for a more comprehensive migration partnership once further progress on human rights has been achieved."

The agreement does not affect the asylum decision-making procedure of the State Secretariat for Migration (SEM). That authority will continue to examine each asylum application on a case-by-case basis in order to determine firstly, whether the conditions for recognition of refugee status are fullfilled, and secondly whether repatriation to Sri Lanka is  permissible and a reasonable measure in each individual case. The new agreement serves to formalise in writing the existing procedures for mutual cooperation with the Sri Lankan authorities with regard to the readmission of persons who no longer fulfil the conditions for continued residence in the respective other country. It  increases the legal security that underpins this cooperation. In order to ensure the proper implementation and application of the agreement and, more specifically, the safe repatriation of returnees and their treatment in compliance with human rights norms, regular meetings of experts are foreseen by the agreement.

Visit to the north of the country

Ms Sommaruga also travelled to the former conflict region in the north of Sri Lanka. As the only Western country, Switzerland has maintained a permanent representation there since 2003. It provided assistance for the reconstruction of some 5100 destroyed houses and has since expanded its involvement with a programme for the protection of labour migrants. The representation provides on-site support for Switzerland’s human rights and peace policy efforts in Sri Lanka and has stationed a human security adviser in Colombo along with a staff member in Jaffna to guide the implementation of programmes in that domain.

Federal Councillor Sommaruga’s journey also included a stop in Kilinochchi to visit the project "Bridges to the Future – Vocational Training in the North/East of Sri Lanka”, for which Switzerland provides funding. The project is designed to offer education and training opportunities for young people and in this way improves their chances of finding work at home. The programme thus offers young people an alternative to emigration. It is expressly open to returnees from Switzerland.

On Monday, in Jaffna, Federal Councillor Sommaruga also had the opportunity to exchange views with returnees from Switzerland who had received individual repatriation grants from Switzerland and who have succeeded in reintegrating in the local labour market. Among those visited was a returnee who has successfully put to use a CHF 3500 repatriation grant to set up a poultry farm that has created a number of new job opportunities for local workers.

Assistance on the path to reconciliation

Federal Councillor Sommaruga also met with the families of disappeared persons as well as with the Chief Minister of the Northern Province, Canagasabapathy Visuvalingam Wigneswaran, and members of parliament from the Tamil National Alliance. Further meetings took place with human rights activists and other representatives of the civil society who also presented their perspective on the challenges inherent in the ongoing national reconciliation process. Ms Sommaruga stressed the importance of Sri Lanka’s continued advancement of reconciliation and the ongoing democratic reform process in the country, together with the elimination of human rights deficits that still remain. Switzerland, she reiterated, is prepared to continue guiding and assisting Sri Lanka along this path.

For the last day of her official working visit to Sri Lanka, Federal Councillor Sommaruga is scheduled on Wednesday to pay a courtesy visit to President Maithripala Sirisena. Ms Sommaruga welcomes the process of reform and reconciliation that has been launched, but will also emphasise the need for further progress, particularly with regard to the human rights situation. She will urge President Sirisena to implement the measures to which Sri Lanka committed itself in last year’s UN Human Rights Council resolution. Among those measures is the repeal of elements of the country’s anti-terrorism law that are not consistent with international human rights standards.

Following her meeting with President Sirisena, Federal Councillor Sommaruga will be travelling to the Indian capital of New Delhi. There she is scheduled to take part, among other things, in the signing on Thursday of two migration-related agreements.