President Sommaruga meets with President and Prime Minister in Ethiopia

Bern. President Simonetta Sommaruga held official talks on Monday with Ethiopian President Mulatu Teshome and Prime Minister Hailemariam Desalegn in Addis Ababa. Talks were centred on intensification of economic relations as well as on humanitarian and migration policy challenges in Ethiopia and neighbouring countries. Sommaruga stated that Switzerland would be increasing its local aid and efforts in the region. 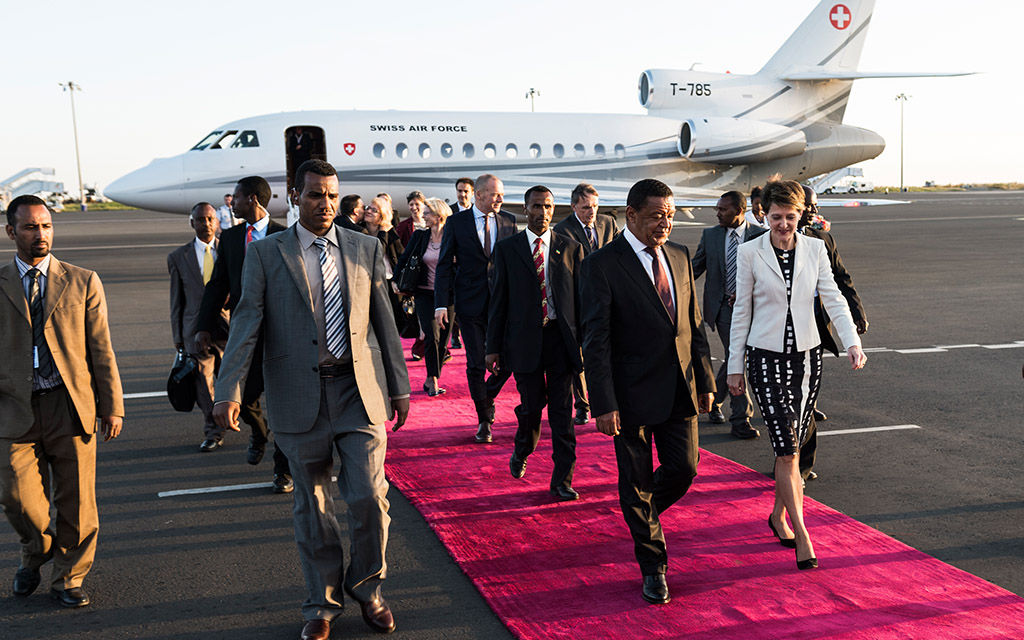 President Sommaruga stated that “Ethiopia is an anchor of stability in this region.” In addition to the civil war in South Sudan, other conflicts, poverty, famine and draught also cause great migration flows within the Horn of Africa. Ethiopia is currently granting protection to 720 000 refugees.

In addition, Switzerland and Ethiopia intend to strengthen their bilateral economic ties. Ethiopia is currently Switzerland’s most important trade partner in eastern Africa and one of the fastest-growing economies of the continent. President Sommaruga is being accompanied by a delegation of business represetatives, in particular from the clean technology sector.

On the first day on the official visit, President Sommaruga and her Swiss delegation visited a refugee camp in Jijiga in eastern Ethiopia. Switzerland financially supports the UN World Food Programme, which is active in this camp. There are 12 300 refugees living in the Sheder camp in Jijiga, most of whom are Somalian.

On Sunday at Jijiga University, the Swiss delegation launched a new health project called “One Health”, which is being pursued by the Swiss Tropical and Public Health Institute and supported by the Swiss Agency for Development and Cooperation (SDC). With its innovative approach, this interdisciplinary project intends to improve the health of both humans and animals in the largely agricultural regional state of Somali.

During this working visit, President Sommaruga will also be visiting a project in Addis Ababa funded by the State Secretariat for Migration (SEM) aimed at offering future prospects to Eritrean refugees in Ethiopia.

In addition, President Sommaruga will be giving a speech on federalism in the House of People’s Representatives, the Ethiopian Parliament’s large chamber. For around 20 years, the Federal Democratic Republic of Ethiopia, which encompasses 80 ethnic groups and almost 100 different languages, has been developing a federal state model. This model is regarded as one of the main reasons for the country’s stability.